This is a picture of my father, my brother and me in front of the gates of Auschwitz during the March of the Living in the spring of 1999. In 1944, my father said goodbye there to his mother, brother and sister. He was later separated from his father at Plaszow, the camp that was near Schindler’s factory. My father was the only one to survive. To this I day I cannot watch the movie, Schindler’s List, knowing that someone in there was my grandfather, and that he was not saved. It is unbearable to think about.

My father was not liberated at Auschwitz, but he was liberated by the Americans, something for which he is eternally grateful. He returned to Germany in the 1950s, but this time as an America soldier.

Below is an unusual picture. How do you pose with your dad, a survivor of Auschwitz, at the very gate he had entered decades earlier. My brother and I decided independently on very serious looks. My dad is smiling broadly. He made it back, and he brought the next generation he and my mom, Sharon, created.

We as a people are still, and always will be, vital and alive no matter what. 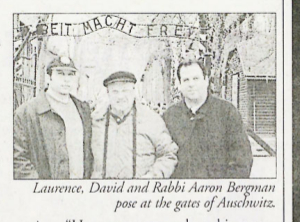 Here is a link to my father’s story, including video of his testimony:

For the Jews in France who are suffering in so many ways, from grief and fear and isolation. This is one of the most unusual versions of Hatikvah that you will hear.

I pray for the hostages in the kosher supermarket in France, the family who just wanted a peaceful and happy Shabbat, and pray for all those suffering from terror at this very moment.

I also wonder how much of what we are seeing today is a result of European indifference to increased anti-Semitism, and anti-Israel rhetoric?

I was reminded of this passage from the last world war.

MARTIN NIEMÖLLER: “FIRST THEY CAME FOR THE SOCIALISTS…”

Martin Niemöller (1892–1984) was a prominent Protestant pastor who emerged as an outspoken public foe of Adolf Hitler and spent the last seven years of Nazi rule in concentration camps.

Niemöller is perhaps best remembered for the quotation:

First they came for the Socialists, and I did not speak out—

Because I was not a Socialist.

Then they came for the Trade Unionists, and I did not speak out—

Because I was not a Trade Unionist.

Then they came for the Jews, and I did not speak out—

Because I was not a Jew.

Then they came for me—and there was no one left to speak for me.